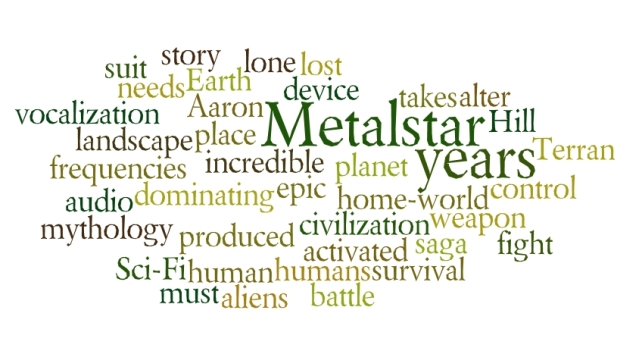 The aliens in Metalstar, as with all creatures of horror tales and romantic literature, are the embodiment of the id. They are the expressions of the collective unconscious and of a fascination with human potentiality for dark wishes and deeds. Throughout mythology the role of such monsters and the opposition of the human is the most familiar method dramatizing the idea of doubling, the two aspects of the same character usually good and bad selves, and can be found in romantic literature of the 19th Century and well into the newly established genre of Science Fiction. Sci-Fi often intimates alien races traditionally relegated to the monster element.

Metalstar mirrors Promethean mythology. Prometheus stole fire from the gods and gave it to mortals becoming the champion of mankind. In this case, however, the gods themselves offer to the humans the fire in the form of the Metal Stars. The monsters, represented by the aliens turn against their creators in a bid to aide their new found counterparts, the humans, and form an alliance based on mutual suffering.

It is always possible to reduce a work of literature to its basic psychic components. Often we send our monsters out to do the work that we cannot ourselves, as writers, perform. At a deeper level the monsters actions express the emotional intention of the authors themselves. In the case of Metalstar the aliens are a literal translation of those humans who seek to do harm to the planet and cannot seem to find a balance and harmony with nature, loosely referred to as the great robber barons of history. In this recipe the humans are the heroes of the downtrodden and the masses, they represent the larger percentage of the pie, those who are disenfranchised and lack the potency to effect real change. They evoke the help of gods, those stronger than themselves, to help restore the balance of power. Baring more then just a resemblance to the French Revolution, the story embodies elements that are found throughout history whenever a stronger power seeks to dominate a weaker force.